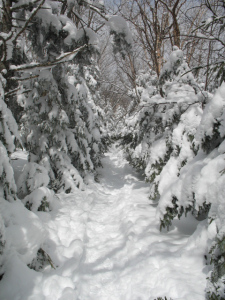 Lovell, and much of western Maine, was hit by a fierce snowstorm overnight. Just when the daffodils were blooming, almost a foot of snow covered the ground. Lulled by eighty degree weather just last week, Road Commissioner Larry Fox had ordered his town crew to take the plows off of the trucks for summer maintenance. The roads are a mess and may remain so for a few days. When reached by phone, Mr. Fox said that "...Mother Nature will move the snow as well as fast as we could. In these tough economic times, it is critical that we save money for the taxpayers. Is it really that inconvenient?"

One prominent West Lovell resident welcomes the snow as it will provide the perfect fertilizer for his large vegetable garden and doesn't think that it is that unusual. He likes to tell the story that his championship Fryeburg Academy baseball game was delayed for several days due to snowstorms adding that Al Gore is the goofy one.