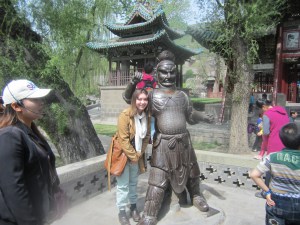 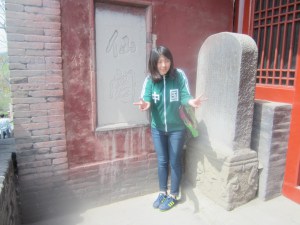 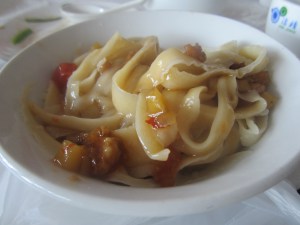 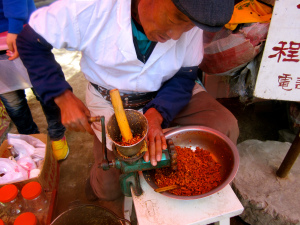 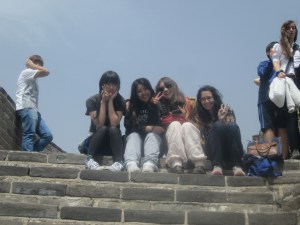 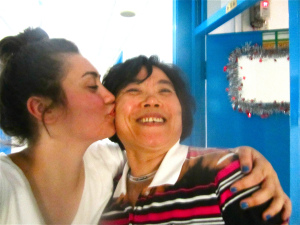 My, oh my, how fast the time has gone by! It seems like only yesterday that we drove Anna to Portland in the middle of the night in the aftermath of Hurricane Irene. She is now in the home stretch of her Beijing stay and is scheduled to return on the 23rd of June.

On weekends, Anna has been blessed to be associated with a wonderful host family and has had the opportunity to experience the Chinese culture firsthand. She accompanied the family on a trip to their home town in the province of Shanxi where she visited many local buildings. She has learned to appreciate the temples and buildings and as Anna says,"...it truly boggles the mind when you think how OLD they actually are".

Her host sister, Tian Jiao, is 16 years old and is a junior in high school. She is on track to attend college in England where her interests are fashion design and psychology.

Shanxi is famous for its noodles (which look delicious) and its spices. Not sure what spice the gentleman is grinding and selling in small jars but I'm not sure if I would be brave enough to try!

No trip to China would be complete without a visit to the Great Wall. Anna has been to the Wall three times at three different locations. On her most recent visit, Anna and her friends climbed the Wall's many twists and turns and decided to sit down for a rest. They began singing popular American songs and entertained the many people walking by.

Anna has survived the rigorous HSK language test (although she won't know her final score until just prior to leaving) and gave her final 'paper' on the various modes of transportation in Beijing. Making sure that Michael Dana, her former Fryeburg Academy film teacher, would be proud, Anna incorporated video interviews of taxi drivers as well as videos of the subway system, buses, pedestrians and bicycles into her presentation.

Due to arrive back in Portland on June 23rd, Anna is enjoying her last two weeks at the No. 80 High School. One person who played a major role in her daily life has been her dorm mother Zhang. Although she was responsible for making sure her room was always clean and tidy, as well as getting up on time in the morning, Anna will forever have fond memories of Zhang.

Anna is enrolled in the Chinese Flagship Program at Hunter College, NYC and will start a summer program in July and will continue in the fall. Prior to that she is looking forward to seeing her friends, smelling the wonderful Maine air and swimming in Kezar Lake.